Built in 1842 for Barrington and Catherine Nephew King, Barrington Hall sits on a prominent site directly across from the town square. Barrington King was the son of Roswell King, and a co-founder of the Roswell "colony." Barrington's Greek revival mansion with fourteen fluted columns and a porch extending on three sides, had a commanding view of the village.  From the captain’s walk on the roof, Barrington could see the mill, Vickery Creek and the Chattahoochee River in the distance.  A circular drive bordered by cedars led from the street down to a handsome, tall, white, arched gate inscribed with the name “Barrington Hall.”

A reporter from the Atlanta Journal described the estate in 1923.

The tall white columns, glimpsed through the dark green of cedar foliage, the wide veranda encircling the house, the stately silence engendered by the century old oaks evoke Thomas Nelson Page’s Ole Virginia.  The atmosphere of dignity, peace, and courtesy that was the soul of the Old South breathes from this old mansion, as it stands at the end of a long walk, bordered by old-fashioned flowers.
Margaret Mitchell on Barrington Hall, 1923

Occupied by the Barrington King Family and their descendants for 160 years, the beautiful home on the historic town square is now owned by the City of Roswell.

From Barrington Hall back to Roswell Historic Sites

Barrington Hall circa 1936 Library of Congress 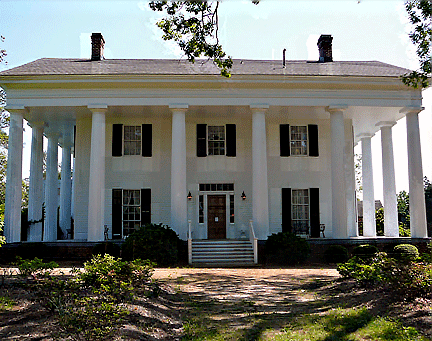