The Sweetwater cotton mill, known by locals as the Sweetwater Factory, stood on the banks of Sweetwater Creek, where the rushing waters made their final push to the Chattahoochee River, tumbling across shoals created by the hard rocks and deep water.  The land originally belonged to the Cherokee, but like Roswell, had been divided into 40-acre land lots in 1833.  Lot 929 was deeded to Phillip J. Crask who lost it to back taxes four years later.  Sold on the courthouse steps to the highest bidder, the lot was purchased by John Boyle of Campbell County for $12.50 in 1837.  Eight years later Boyle realized a substantial profit when he sold lot 929 for $500 to Colonel James Rogers of Milledgeville and Charles M. McDonald of Cobb County, a lawyer, legislator, co-founder of the Georgia Military Institute and 19th governor of Georgia.

Inspired by the success of the Roswell factories and other textile mils throughout the state, Rogers and McDonald purchased the property with the idea of erecting their own cotton mill, and construction began shortly thereafter.  By late 1849, the Sweetwater Manufacturing Company was in full operation.  The massive 48 by 120 five-story red brick factory was said to be taller than any building in Atlanta.  Made up entirely of local materials, the bricks were formed on the site and burned on the banks of the creek, and the foundation stones quarried downstream.

The small village of Sweetwater, or Factory Town as it was most often called, bore little resemblance to Roswell some 30 miles away.  Since the Sweetwater mill owners lived in Marietta, several miles distant, day-to-day operations were left to the onsite superintendent.  There were no palatial homes or plantations in Sweetwater, no fancy churches, and no academies.  Sweetwater consisted primarily of small farms, and it was for the most part, the daughters and sons of the local farmers who went to work in the mill.  There seemed to be a greater since of pride and camaraderie in this tight-knit community of mill workers and farmers.  Nearly every worker, skilled or unskilled, had lived in the area before the factory was built, and there is little evidence of the class division so prevalent in Roswell.

Charles McDonald reorganized the company in 1857 and changed the name, under the new charter, to the New Manchester Manufacturing Company.  The village would now be officially known as New Manchester, but the name never seemed to catch on with the locals. 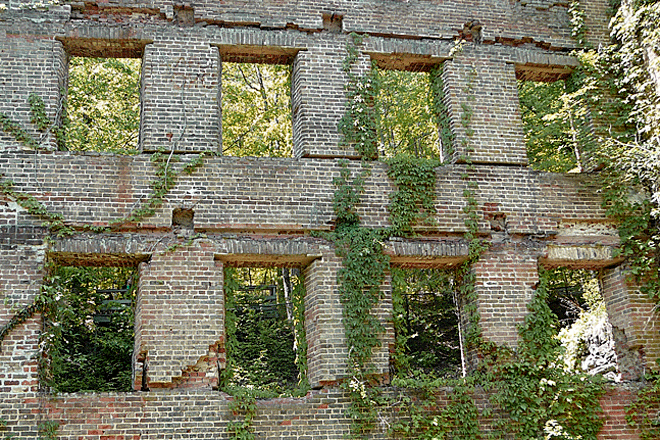