The Evil Doctress - Fact or Fiction?

Some local historians, and at least one television program, would have you believe that the female mill workers were imprisoned in the Louisville Female Military Prison where they suffered a terrible fate at the hands of the famous, or infamous, Dr. Mary Walker. In fact, Turner South's “Liars and Legends” portrayed Walker as a mad woman with hatchet in hand. However, prison registers confirm that there is no truth to this story. The Louisville Female Military Prison, located some distance from the refugee house, did not open its doors until August, sometime after the mill workers had arrived, and only held 25 to 30 women at that time. Furthermore, none of the mill workers appear on the prison registers at any time. While the mill women remained at the refugee house down the street until their release or transfer, a number of other Georgia women and children, arrested during Sherman’s Atlanta campaign, spent many long, difficult months behind the walls of the female facility. Dr. Mary Walker, better known as the first woman to be awarded the Congressional Medal of Honor is a fascinating and interesting study, and the “evil doctress” is the subject of my current research.

The history of New Manchester has long been marked by myth and speculation. In addition to rumors of the total destruction of the entire town by Union soldiers, a tale of mass executions surfaced in 1987. A Marietta newspaper cited a local historian’s contention that Union soldiers sent the women north as ordered, but took the men out some distance, shot them in cold blood, and then buried them in a mass grave near Marietta. The newly discovered list of Sweetwater employees arrested as Political Prisoners and received at the Louisville Military Prison has finally put that theory to rest. Additionally, further research proved that a large number of New Manchester men and their families returned to the area following the war. Some of the workers returned to their own farms while others simply moved to nearby towns.

Some fifty years after the Civil War, General Grenville Dodge mentioned the Roswell women, but he never stated that he actually saw them in town, so it is not clear that he was an actual witness to any of the events. What he did say has stirred up a great deal of confusion. Dodge claimed that General Garrard moved the operatives, “mostly women,” to Marietta “by detailing a regiment of cavalry, each member of which took one of the operatives on his horse, and this way they were all taken to Marietta.” This has been widely circulated as true although there are no other accounts to substantiate this assertion, and much evidence to the contrary. The facts indicate that most of the women had already left Roswell by the time Dodge arrived. If he actually witnessed any women being taken out of town on horseback, it was most likely the few women that remained after the 10th. In which case, Garrard may well have decided to send these last women out on horseback, rather than wait for the wagons, given the recent events involving the women and a group of drunken soldiers. However, it would certainly not have required a “regiment” of cavalry.

Who Destroyed the Roswell Mills?  Miscommunication or Faulty Memory?

One of the New Manchester mill managers, Henry Lovern, testified in 1868 that when Major Haviland Tompkins arrived at the factory on the 9th Of July, he informed Lovern that “he” had burnt the Roswell factory on the Thursday previous, and that Tompkins had orders from General Sherman to burn the New Manchester mill. Whether it was a simple miscommunication, or whether Lovern’s memory was at fault, there are a couple of problems with the statement Lovern attributes to Major Tompkins. First of all, the Roswell mills were not burned on the Thursday prior. They were actually burned on the 6th of July, which would have been the Wednesday prior. Secondly, I have never found any evidence that Tompkins was ever in Roswell. I have to wonder if Tompkins didn’t really say “we” burnt the mills – meaning the Union army – and Lovern just took it literally. I have personally reviewed hundreds of newspapers, letters, diaries, journals, and official reports and have never seen any mention of Tompkins at Roswell. Garrard ordered Captain Darius Livermore of the 3rd Ohio Cavalry to oversee the destruction of the Roswell mills. He was to take one squadron from his own regiment, one from the 4th Ohio Cavalry, and a section of the Chicago Trade Battery to follow in support. Garrard makes no mention of Tompkins nor was Tompkins attached to any of these units. Unfortunately, Lovern’s deposition has led to several web sites incorrectly identifying Tompkins as being responsible for the destruction of the Roswell mills.

From Fact or Fiction back to Roswell Women 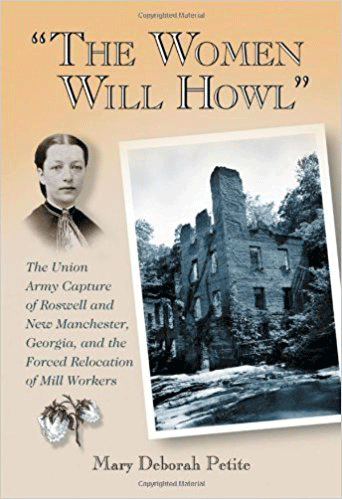 The Women Will Howl
Order Here!