Few are familiar with the tragic events that took place in Roswell during Sherman's march on Atlanta, but a local branch of the Sons of Confederate Veterans has taken steps to ensure that the story of the mill workers is not forgotten.

HONORING THE MEMORY OF
THE FOUR HUNDRED WOMEN, CHILDREN, AND MEN
MILL WORKERS OF ROSWELL
WHO WERE CHARGED WITH TREASON
AND DEPORTED BY TRAIN TO THE NORTH
BY INVADING FEDERAL FORCES

A new landmark has been added to Roswell’s historic landscape. In 1998, the Roswell Mills Camp #1547 Sons of Confederate Veterans voted to erect a monument to the Roswell mill workers.

For many years the only memorials in Roswell were plaques placed in the town square to honor Roswell King and the founding families.  The mill workers are as much a part of the town’s history, if not more so, yet many of Roswell’s own citizens had never heard the heartbreaking story.

The mill worker monument, a 10-foot tall granite Corinthian column, unveiled in July 2000, stands in a small park in the heart of the mill village on Factory Hill. The shattered column symbolizes lives torn asunder, an eternal reminder of the suffering of those innocent victims caught up in the whirlwind of war.

The monument honors the mill workers; the men, women and children of Roswell who were torn from their homes by military decree and sent away to distant lands ...hauntingly reminiscent of another time, another people, and another trail of tears.  While many of their names are unknown, the monument stands as a tribute to each and ensures their place in history for years to come.

Past Commanders of the Roswell Mills Camp 1547, John Cobb (left) and Howard Bryant (right), unveil the new interpretive marker at dedication services on September 30, 2012. (Photo courtesy of the Revue and News, www. NorthFulton.com)

An interpretive marker titled, The Lost Mill Workers of Roswell, has been placed near the Mill Worker Monument on Sloan Street. A collaborative effort of the Roswell Mills Camp #1547 of the Sons of Confederate Veterans and the Georgia Civil War Commission, the marker was dedicated on September 30, 2012, as part of Georgia’s ongoing sesquicentennial celebration of the Civil War. Former commander of the Roswell Mills Camp and my dear friend, the late John Cobb, played a key role in seeing the project to fruition and wrote the text describing the arrest and deportation of the mill workers. The marker includes an original piece of artwork by local artist, Mary Jane Warren Stone. For more information on the text and artwork: SCV1547.org

From Mill Worker Monument back to Roswell Historic Sites 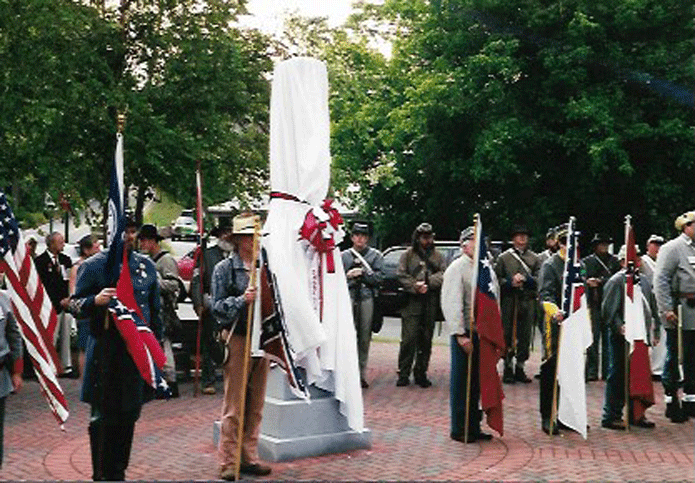 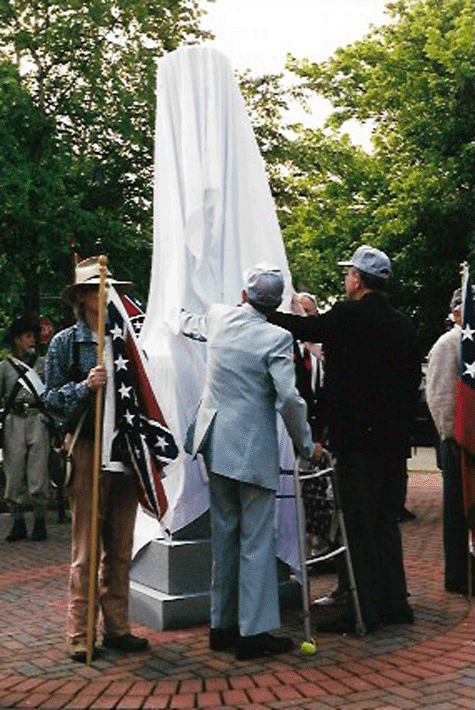 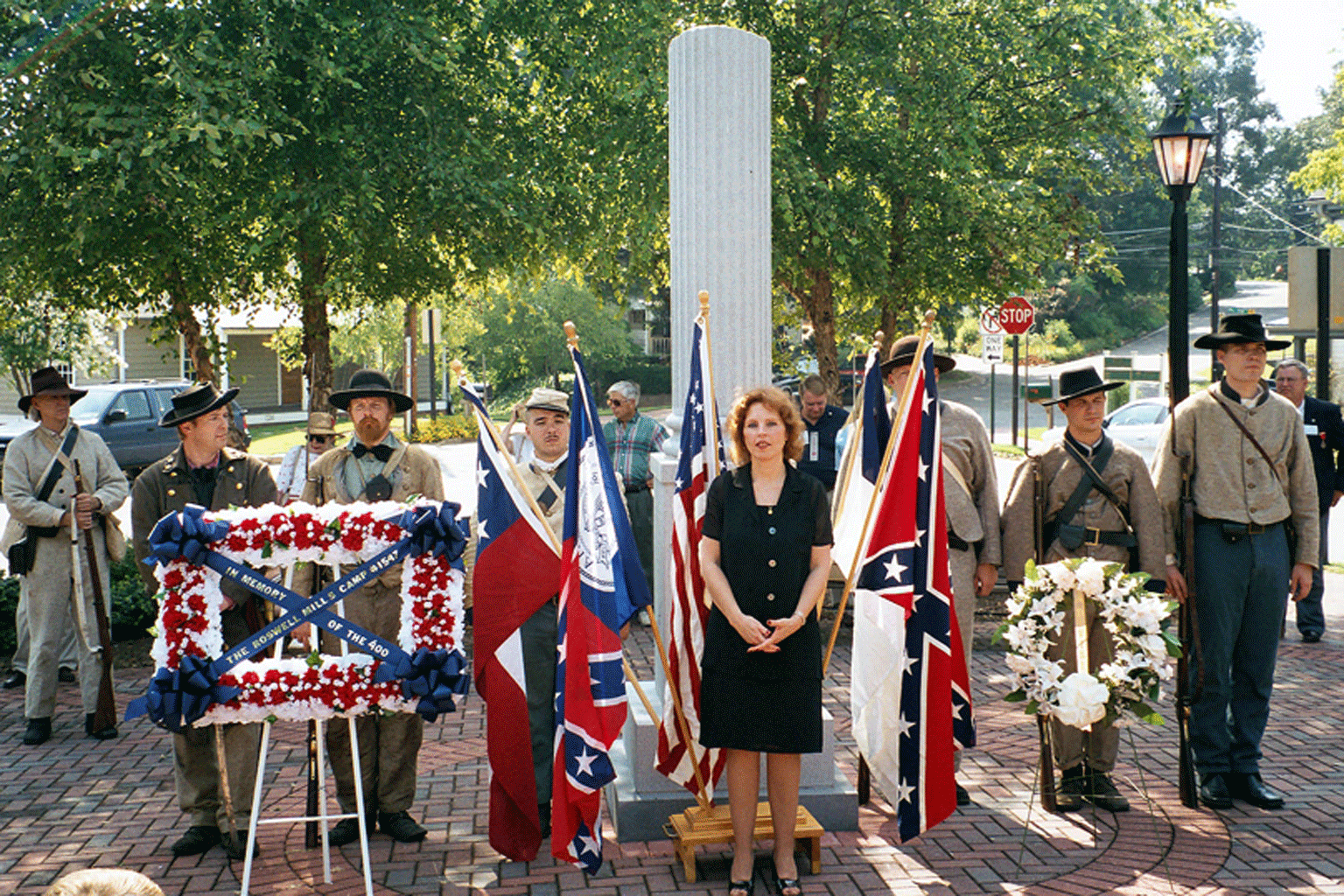 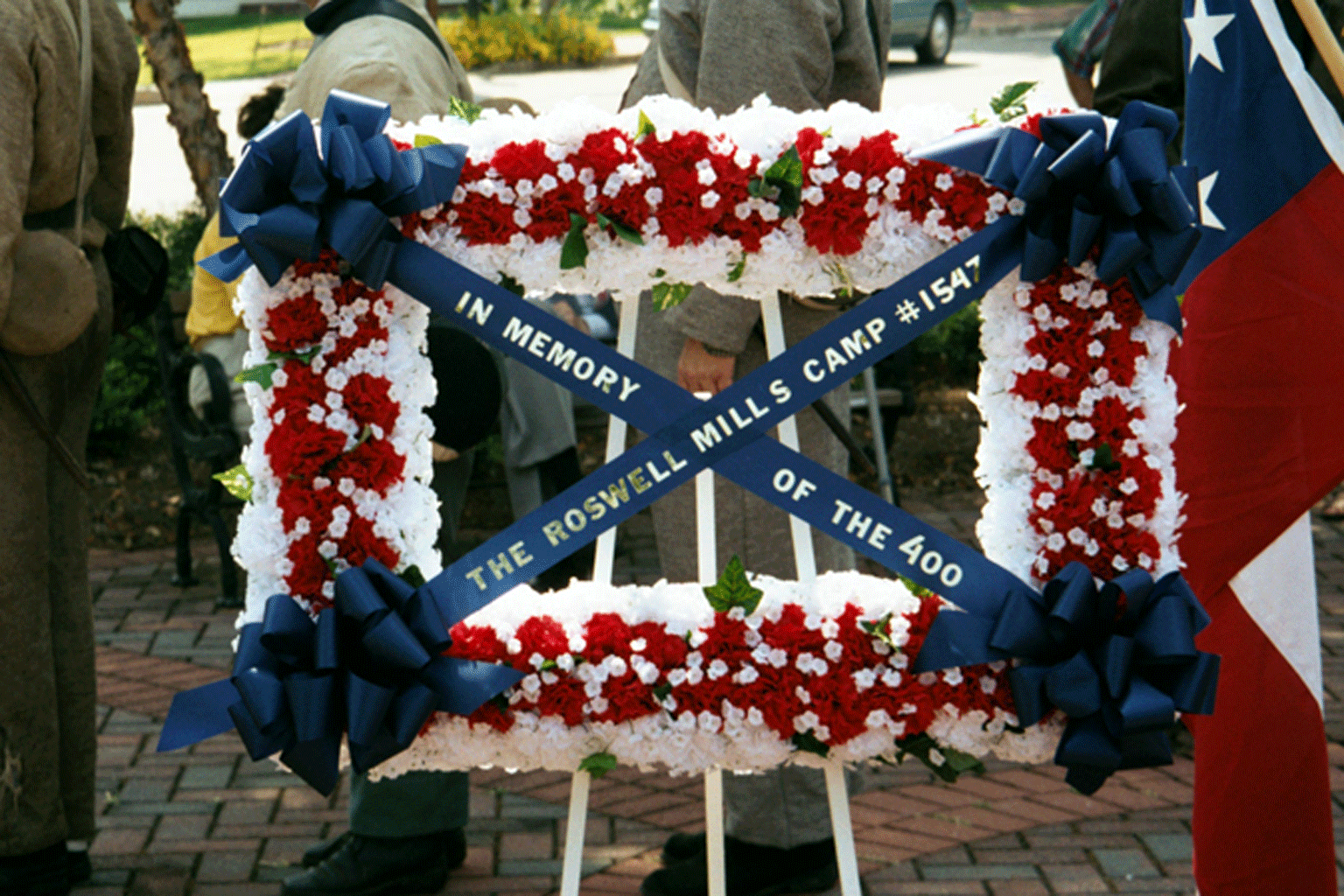 Memorial Service Wreath, "For the 400"