Several members of the founding families are buried in Founder's Cemetery including Roswell King, James S. Bulloch, John Dunwody and his wife Jane Dunwody. Visitors will only find 23 marked graves, but at least 65 people were buried here. Some graves are marked only with large stones, and others are not marked at all. The first burial was that of Charles Irvine Bulloch, aged 2 years, who died of scarlet fever during an outbreak in Roswell in summer of 1841. Founders Cemetery closed in 1860. Members of the Presbyterian Church who died after 1860 were buried in the new cemetery on the church property at the intersection of what is now Atlanta Street and Oak Street. A small stream once separated the cemetery from the church. Today the stream has been replaced by a highway. 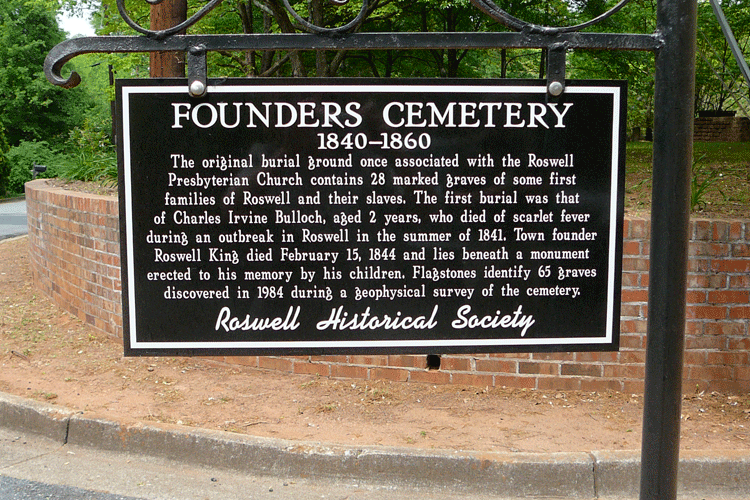 Roswell King's lovely monument, erected by his children, and adorned with white Cherokee roses, occupies a prominent place in the old city cemetery.

He was the founder of the village which bears his name.
A man of great energy, industry and perseverance
of rigid integrity, truth and justice.
He early earned and long enjoyed the esteem
and confidence of his fellow men.

Inscription from the Roswell King Monument

From Founder's Cemetery back to Roswell Historic Sites