Sadly, the mill workers lost one of their most devoted champions in 2012 with the passing of John Cobb, a remarkable man and dear friend. Dedicated to ensuring that the story of the mill workers would not be forgotten, John worked tirelessly and passionately to that end and played a significant role in the erection of a monument and later an interpretive marker in their honor.

I’m not sure that my book would have been written without John’s support and profound influence. I had the pleasure and honor to meet him in late 1998. He, along with a few other members of the Roswell Mills Camp of the Sons of Confederate Veterans, took me on my first tour of the mill ruins and other historic sites. John introduced me to key people who provided information I could not have obtained elsewhere.

John supported my work from the very beginning, and he was a constant source of inspiration. His encouragement motivated me to struggle through some discouraging periods when it seemed like the book would never be finished. After the book’s publication and my relocation to California, John remained in touch and kept me up to date on related events, closing every letter and email, “For the 400.”

John touched the lives of many people, I was just one. John was my friend and my hero, one of the kindest and most compassionate men I ever met, a true Southern Gentleman. He will not be forgotten.

Past Commanders of the Roswell Mills Camp 1547, John Cobb (left) and Howard Bryant (right), unveil the interpretive marker at dedication services on September 30, 2012. (Photo courtesy of the Revue and News, www.NorthFulton.com)

From John Cobb back to Roswell Mill Worker Monument 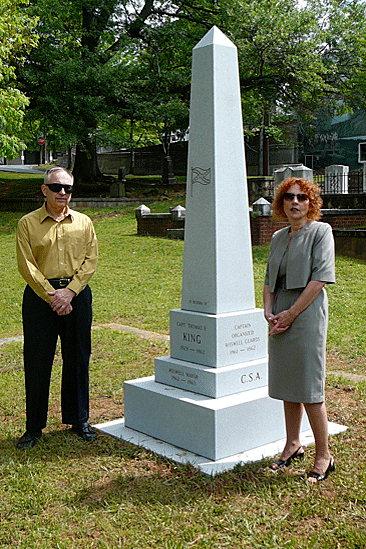 The 9-foot monument commissioned by the Roswell Mills Camp 1547, marks the grave site of Roswell Civil War hero Captain Thomas E. King. Capt. Tom was someone John and I greatly admired, and we were both so happy to see the Captain honored with the marker he so richly deserved.