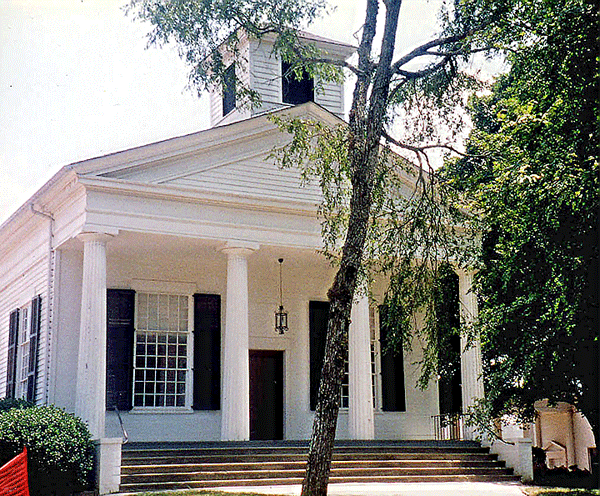 Religion played a central role in the lives of Roswell’s first citizens who were devout Presbyterians.  The Roswell Presbyterian Church was established in 1839, the same year that the Roswell Manufacturing Company opened its doors for business.  The first church services were held in Roswell King's daughter’s home at Primrose Cottage, but plans for a proper church building were soon underway.

Completed in 1840, the Roswell Presbyterian Church occupied a prominent site on land donated by the King family.  Described by a King family descendant as a “sentinel on the brow of a hill,” the church, designed and built by Willis Ball, reflected the classic Greek revival form of architecture so popular with Ball, with four large columns and pedimented gables.  An iron ship’s bell, a gift from members of a Savannah church, hung in the short square steeple.  Modeled after New England meeting houses, the interior of the church held box pews, a raised pulpit, and a gallery for the slave members in order that they might worship with, albeit physically apart from, their owners.

In April 1839 the members of the colony invited Reverend Nathaniel Alpheus Pratt, pastor of the First Presbyterian Church in Darien, to become their pastor and to assist them in organizing the new church.  Pratt, who was married to Roswell’s daughter, Catherine King Pratt, would serve in Roswell as pastor until his death in 1879.

The church was converted into a Union hospital during the Federal occupation, much to the dismay of Reverend Pratt, who, according to the surgeon in charge, “was not at all pleased at our polluting his house with sick and wounded Yankee soldiers, notwithstanding the land of wooden nutmegs [Connecticut] was his early home.”  As there were few patients in the makeshift hospital, it was the perfect setting for Sunday services. On the morning of July 10th, the church bell rang at 10:00 A.M., calling the Yankee soldiers to a “divine service." William Records of the 72d Indiana noted that it was “quite novel to go to church at the sound of bell instead of bugle." One of the old cabinet doors in the Presbyterian church still bears the drawing of a checkerboard made by a wounded soldier during his brief stay.

The Roswell Presbyterian Church has been in continuous operation since 1840 and looks much as it did when it was built.   Although new buildings have been added to meet the needs of the growing congregation, early morning services are still held in the original sanctuary with its raised pulpit and slave gallery

From Roswell Presbyterian Church back to Roswell Historic Sites